We spent two nights in Nairobi at a campground called Karen Camp which was outside of the city -the meeting point for our tour. Beside a trip to the local shops, we just chilled, met the other 9 people on our tour, and sorted some things ready for the next two months.

It was a long bumpy drive along dusty roads to the Masai Mara, but after being in Africa for just two days, we were taken on an introductory game drive that afternoon – what an incredible way to start the trip! We saw Lions with their cubs, Cape Buffalos, Zebras, Wildebeest, Impalas, Thomson’s and Grant’s Gazelles and Antelope.  We were all buzzing with excitement as we ate dinner at the camp that night, as we started to get to know each other over a beer or two.

The next morning three of us were picked up from the camp at 4.00am for the experience of a lifetime – a hot air balloon flight over the Masai Mara at sunrise! As the balloon gently lifted into the sky the views all around us were just incredible. We glided over a family of Elephants, and couldn’t believe our luck at spotting a group of Lions lay in the tall grass eating their prey. We also saw herds of Wildebeest and other small game. After the hour-long flight we landed in the middle of nowhere where a champagne breakfast awaited us.

We were then taken on a game drive on route to meet up with the rest of the group, where we spotted a Lion, a family of Elephants, Baboons, Giraffes, small game and birds.  Once with the group we spent the rest of the day on a game drive, where we saw Hippos and some giant Crocodiles in the Mara River, as well as Lions, Elephants, Warthogs, Zebras, Wildebeests, Antelope. We then visited a Masai village where we saw what life was like in a traditional community and Ian even got involved in the ‘jumping completion ‘where the height of your jump determines the number of brides you will have – apparently Ian will have 3 wives…! 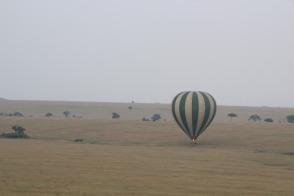 Looking at another hot air balloon from ours 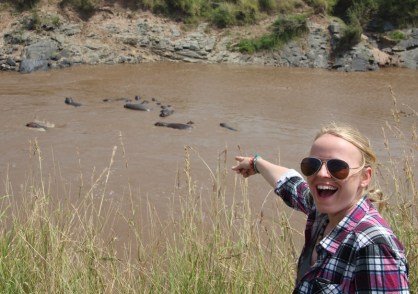 First sight of the Rhinos 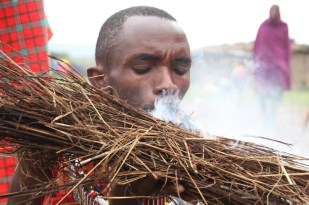 Ian joining in the jumping competition with the Masi Mara Tribe

Not much to report here – just a one night stop after a full day of travel before an early start the next morning to cross over the border into Uganda!