We left Arica, Chile on a public bus which would have taken 8 hours to get to La Paz, Bolivia. Unfortunately once at the border, having had our passports stamped to leave Chile, the border suddenly closed for 3 hours and we could not cross into Bolivia. Having left Arica at sea level, the border stood at around 5000 metres above sea level, so whilst our bus was stranded at the closed border many of the locals were suffering from the change in altitude, as well as us. We were the only foreigners on the bus, and our Spanish is extremely limited to say the least, so we had no idea why the border was closed or what was happening. We finally arrived into La Paz at around 9pm; 4 hours later than scheduled which was not an ideal time of night to arrive in this city where ‘express kidnappings’ are apparently a common occurrence! 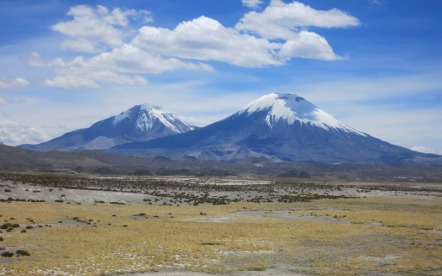 Active volcanoes on route to Bolivia 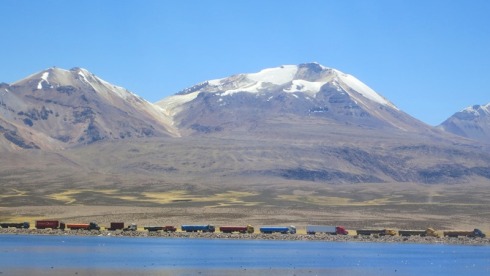 Queue of trucks stranded at the Chilean border crossing

So La Paz. The altitude, the local’s dress, the city’s layout, and the constant hum of the place makes it so unique. We really enjoyed just walking around (slowly and breathlessly!) and taking it all in. 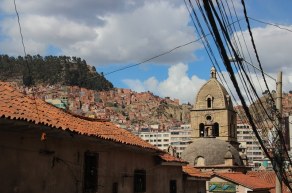 La Paz is also where we joined our G-Adventures tour group for 4 weeks which finishes in Rio for Christmas.

We spent three nights in this area – the many hours of travel time meant we got to know our seven other group members pretty quickly! We travelled around in two 4x4s through this dramatic and unique landscape.

The highlights were the salt flats themselves, high altitude lagoons home to flamingos, geyser fields with bubbling mud and steam, active volcanoes. swimming in natural thermal pools, stargazing in the middle of the desert, and visiting a ‘train cemetery’. We also stayed a night in a salt hotel, completely made of the salt from the surrounding salt flats. 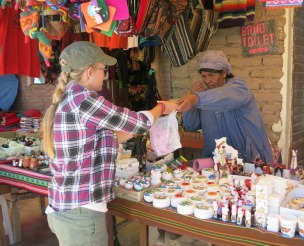 Making a purchase at the local market

Salt piles prepared by the locals for refinement 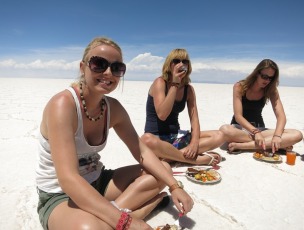 Stopping for lunch on the salt flats 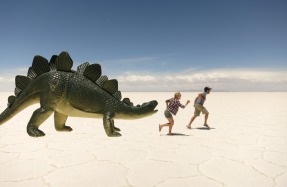 Having fun on the salt flats! 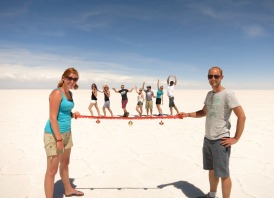 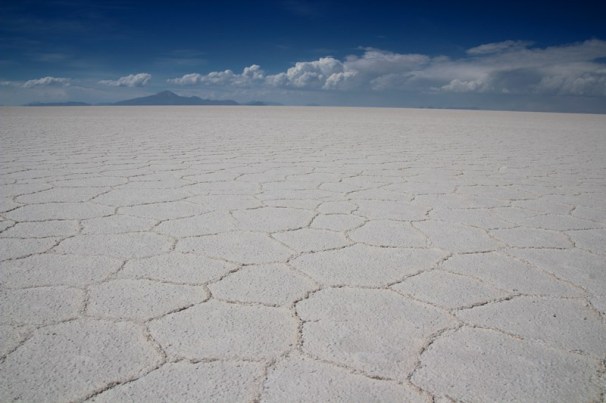 Cactuses in the middle of nowhere 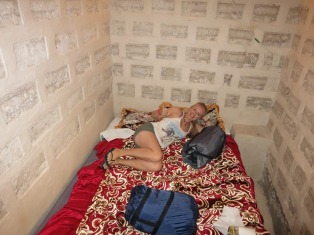 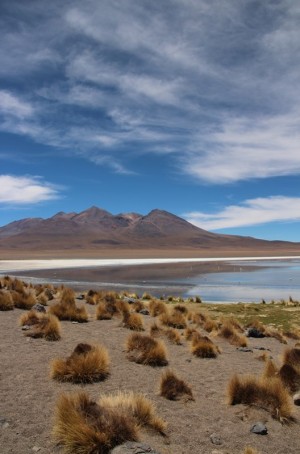 Ian at the Flamingo Lagoon 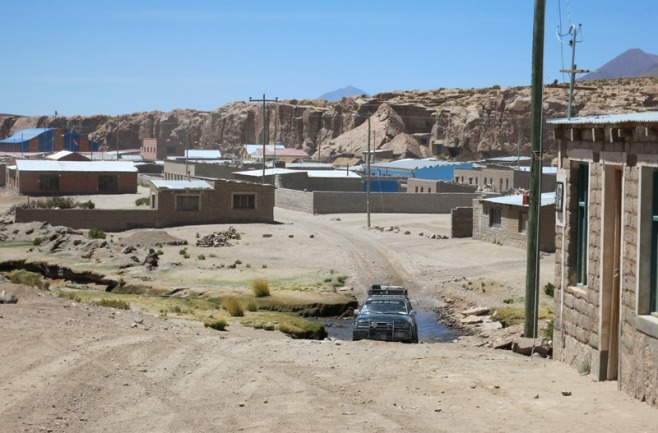 Driving through a remote town 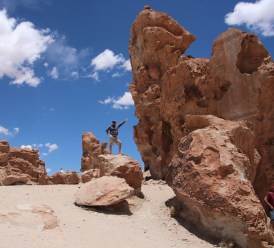 Potosi is the highest city of its size in the world, sitting at 4070m. A once massive silver mining town around three hundred years ago, Potosi is still a mining town but on a much smaller scale. Back in the day, under Spanish rule, around 8 million African and Indigenous slaves died in the mines under extremely poor conditions. We were able to go and visit the main mine, being guided through the tunnels and seeing the miners working. It was so interesting (and a little scary) to see and hear how the mine works, the lack of safety and overuse of coca leaves and alcohol. This is also the only place in the world where you can legally buy dynamite!

Preparing for the mines with our dynamite and cocoa leaves 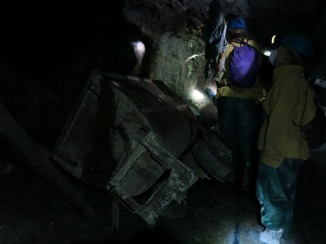 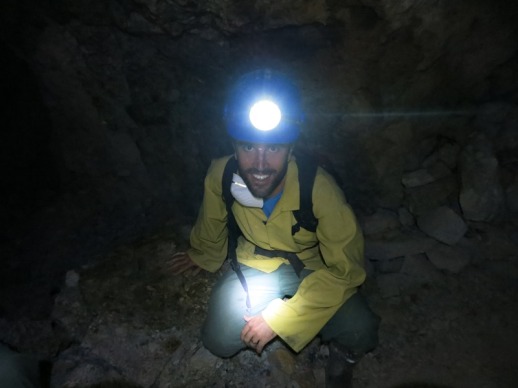 Ian in the mine 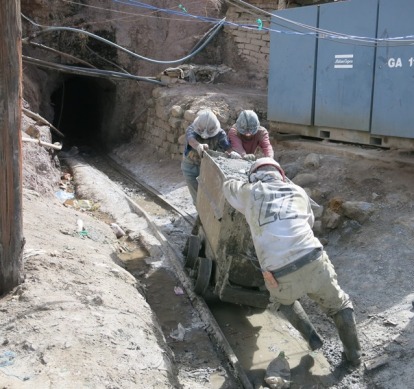 We stayed in Sucre, the ‘official’ capital of Bolivia, for three nights. It gave us plenty of time for some well-earned rest and relaxation as well as taking in the sights of the town, famous for its white buildings. One of the highlights was visiting an orphanage run by nuns, where we spent time just playing with the toddlers and babies. 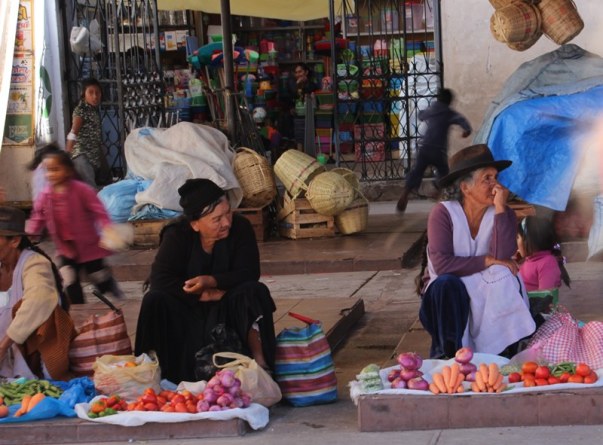 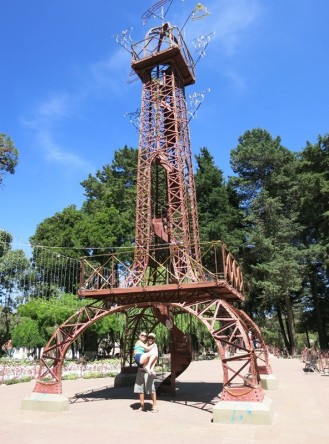 Night out in Sucre

Night out in Sucre

Who knew the supermarket was so much fun!

A short flight took us from Sucre to Santa Cruz where we met our new guide Ben, and was really just a stopover on the way to the Brazilian border.

One response to “Bolivia”